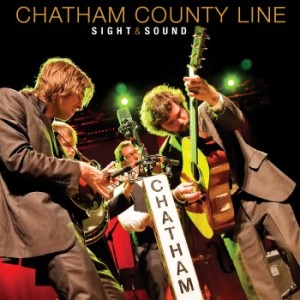 On a recent summer evening in downtown Raleigh, NC, Chatham County Line set up shop at a stately theater filled with hundreds of their most devoted fans and captured for the ages what they do best: gathering around a single microphone to play and sing their own songs.

The result, the two LP audio and video collection Sight & Sound, is an essential document of one of the finest acoustic ensembles North Carolina has ever produced. In a state rich with bluegrass, folk and country legends, this quartet stands out for its left-of-center approach, bringing a rock ‘n’ roll sensibility to roots forms in a manner that appeals to traditional and contemporary camps alike.

Sight & Sound includes 20 tracks drawing from all five albums of the band’s decade-long career. Nine songs appear on both the audio CD and the DVD; four are exclusive to the DVD, while the CD expands the collection with seven more tracks (including two taken from a Christmas-tour show in Atlanta).