Often considered the Holy Grail of “real people” records, Kenneth Higney‘s Attic Demonstration was never actually intended to be an official release. It was recorded in New York City by Higney and his accompanist Gordon Gaines (R.I.P.) as a vehicle with which to sell Higney’s songs to other artists and was only pressed to vinyl in 1976 when he grew tired of duplicating cassette tapes. Apparently the Jandekian dissonance of the “A. Demo.” sound was an unintended by-product of the one take demo sessions. Be that as it may, “Attic Demonstration” is a strange sonic world all of it’s own. It is neither too weird to be unappealing to “regular” music listeners nor is it one of those “discoveries” that leaves you wondering what all the hype was about. Acoustic guitar ballads of nearly atonal desolation mix readily with rock ‘n’ roll numbers featuring hiccuping drums and alien sounding electric guitar. Higney’s vocals are by turns sneering and mournful as he sings about lost love and the desire for fame all filtered through his uniquely bent worldview. Although a few ads were placed for the record in The Village Voice and The Aquarian, the fame that Higney sought eluded him (a semi-positive review in Trouser Press notwithstanding). That is, until the album was discovered and distributed by record dealer Paul Major. Attic Demonstration has been featured in the Acid Archives and copies of the original LP have soared in price over the years, but you no longer have to pay $100, $200 or even $300 to obtain a copy of this monumental album on vinyl. One Kind Favor and Kenneth Higney have teamed up to bring you an official reissue of Attic Demonstration remastered, with all the original artwork and with liner notes by the artist. 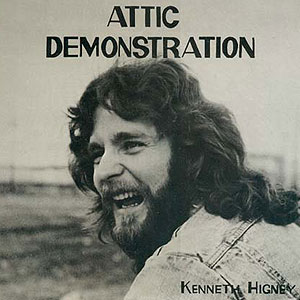