Fun Trick Noisemaker was the first full-length installment in the ongoing musical journey that has grown out of Apples In Stereo frontman Robert Schneider’s infatuation with recording techniques; ranging from four-track bedroom recordings to 100-track studio experiments, to creating new musical scales and mind-controlled synthesizers. Not to mention his ongoing obsession with writing the perfect pop song, a song “that even little kids or your grandparents can sing along with,” as Schneider put it at the time. That creative journey continues until this day. But more than just a starting point, Fun Trick Noisemaker stands on its own today as a masterpiece in the indie rock canon, featuring some of the band’s most loved and indelible tracks such as: “Green Machine”; “Glow Worm” and “Tidal Wave” (featuring one of the most rip roaring lead guitar lines ever put to wax.) 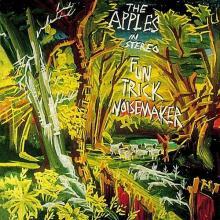