Harkening back to punk rock’s glory days of the 70s, Oklahoma outfit BRONCHO captures the aggression, DIY authenticity and youthful exhilaration of a bygone era and then drags it by the hair into the Here and Now, creating a fresh sound that’s unlike anything being played today. With echoes of The Replacements, Iggy and the Stooges and The Ramones, BRONCHO’s exuberant ten song debut Can’t Get Past the Lips is a blisteringly cathartic 20 minute flash of gritty, crunching guitar work supported by an assaultive rhythm section and made whole by songwriter Ryan Lindsey’s aggressive, yelping vocal work.

Released in conjunction with Oklahoma-based record label (and killer record stores) Guest Room Records, Broncho’s latest LP, Can’t Get Past The Lips, will be available on wax on August 20 at the exclusive Guest Room Records Broncho/Shitty Awesome Release Party (and available everywhere after that)! 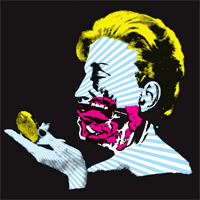 A limited number of records were pressed on pink wax