After two years experimenting in the shadows, cutting edge minimalist-funk heroes Fujiya & Miyagi are back with their darkest and most propulsive set yet. The band’s fourth full-lengther, Ventriloquizzing has a dark heart, via its throbbing electro-glam beat and menacing lyrics. “I think there’s an underlying anger, or perhaps just annoyance, at institutions and people in general, and probably ourselves too,” says singer/guitarist David Best. “And it also seemed like the right time to work with someone else to help us avoid going to our default setting,” which the band combated by bringing in a co-producer for the first time in the form of famed producer Thom Monahan (Devendra Banhart, Vetiver, Pernice Brothers) –their first time not self-producing.

You can preorder the album now at the Yep Roc Webshop — Every pre-order includes a bonus MP3 of the long-player mix by Fujiya & Miyagi titled “Different Blades from the Same Pair of Scissors” in your Stash available on street date along with the full digital album. 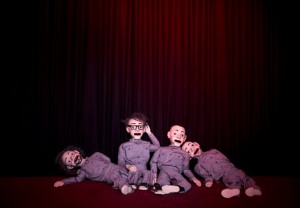