All it took was one listen, and everyone here at GGR became huge fans of this band.  Get yourself a copy here!

STONE AXE was formed in Bremerton Washington in 2008
by Tony Reed(Mos Generator/Treepeople) and Dru Brinkerhoff
(The Swinos)with the intention of recreating and preserving
the sounds of rock music from the 1970s. In 2009 Stone Axe
released their first full length ‘STONE AXE’ and then the tour EP
‘EXTENDED PLAY’ in time for their first US tour which included
Mykey Haslip(drums) & Mike DuPont(bass). During the first year
they also released three 7” singles and a 10” vinyl ep. The new album
‘STONE AXE II’ keeps the spirit of the 1970s fully intact. If ‘self
titled’ is 1968-71, then ‘stone axe II’ is ‘71-’74.

If you were to hear this album without the aid of any background information on its origins, your instincts would probably tell you it was 60’s-era rock, carefully unearthed from the vaults of an overlooked rock band along the lines of Free or Cream. The fact that it’s a new recording is a testament to the precision with which the group crafts not only their songs, but their sound. If you feel like you’ve exhausted your classic rock options, this is a great place to get a fresh start. 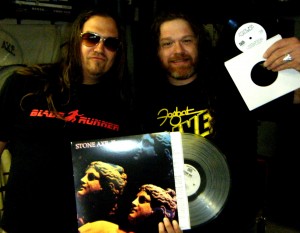