After releases with both Night People and Chapter Music, Australia’s Twerps bring their dark dream-pop to Brooklyn label Group Tightener. This three song 7-inch works as a companion piece (same art split into two) to their recently released 7-inch on Under Water Peoples.

“She Didn’t Know,” begins with a roar of vocals and steadily swings through delicate guitar riffs, rollicking organ jams, and playful puppy dog yelps. The first few moments of the second track, “Anything New,” are a gentle lullaby until the vocals crash in with classic the suburban conundrum of being bored but dreading change. It’s full of delightful wallowing in the desire of an impossible paradox: “I’m gonna be more than a backyard boy” but I also don’t want anything new to happen in my life. The B-side wraps up the record with a devastatingly saccharine winding ballad called “Peculia.”  Limited to 500 copies.  Get it from Group Tightener. 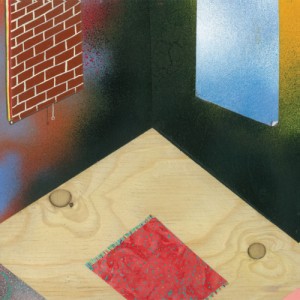