A product of the Brussels and Amsterdam music scenes, Loden’s productions are a blend of M83’s wall of sound, Air’s Virgin Suicides score, and City Centre Offices’ ever-expanding supply of laptop electronica. After some net-label work and a seven-inch for Eat This Records, Loden hit his stride with the 2003 EP, All That’s Left Is Right, which was released in Europe and subsequently licensed by Mush for the rest of the world. 2003 also saw the release of a more dancefloor based EP for Colony Productions and a spot on the Jip EP series. He returned in 2005 with Valeen Hope.  Thanks to Mush Records for bringing GGR on board to press this brand new 7″ by Loden, Self-Aware Wolf/Radio. 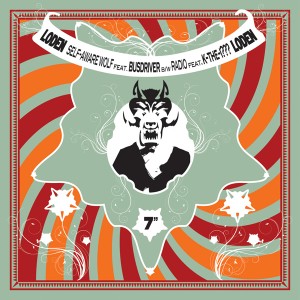 This inspired offering tests his digital crunch against the distinct timbre of two fearless rappers. “Self-Aware Wolf” features left-field champion Busdriver placing a caustic, humorous vocal atop Loden’s bubbly example of digital pop. “Radio” sees K-The-I??? showcasing his booming delivery and striking command of language over one of Loden’s most blistering beats to date. Fans of the red-hot LA beat scene will find these songs rich in modern-man dystopia and pixel pulverization.  Grab a copy from Mush!