Out now from Hells Headbangers on 180gram vinyl in a glossy gatefold cover with large 18×24 poster!

The second full-length Cemetery Urn album maintains their self-proclaimed style of “Australia Barbaric Death Metal,” yet displays a refinement in the bands style & production techniques while steering well clear of the modern overproduced sound of today. Damon Bloodstorm formerly of war metal legends Bestial Warlust leads the assault with undoubtedly the best vokills of his long career. Andrew Gillon lays down a brutal onslaught of guitars with lead work that is at times moody & epic, before launching into the faster almost shredding style displayed on later Abominator albums. “The Conquered Are Burned” evokes the primacy of early 90’s Death Metal without entirely adhering to the trends of Incantation and Swedish Death Metal worship like the majority of today. 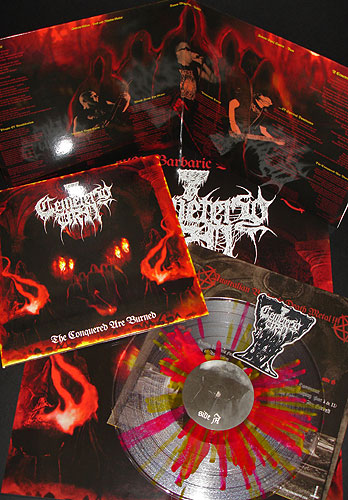