I’ll Keep Calling is the debut album from Nashville’s JP Harris and the Tough Choices. Twelve original songs written by JP and recorded at Joel Savoy’s Studio Savoire Faire in Eunice, Louisiana. Backed by the rhythm section from the Red Stick Ramblers (Eric Fey on bass and Glenn Fields on drums) along with Asa Brosius on steel guitar and Chris Hartway (the Dixons and the Defibulators)on guitar. In addition to engineering the sessions, Joel adds some fiddle to the mix.

Only 29 years old, JP wrote all twelve songs on the album and sings them in a voice that seems beyond his years. Having hit the road at the young age of 14, he has been living the songs he writes for well over a decade. With a guitar always in his hands, he began playing and singing early country standards around sheep-herding camps in the southwest, and later in hobo jungles and on freight trains across the country. Living and working the past ten years as carpenter, logger, apple-picker, banjo-builder, busker, and a slew of other low-paid, dirty-handed trades in rural Vermont, JP decided to take to the road once again as the neon and stage lights beckoned relentlessly. Relocating closer to his home-city of Montgomery, AL in September of 2011, JP now calls Music City (Nashville, TN) home. 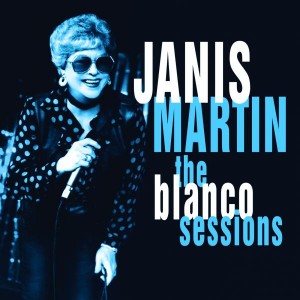 We are proud to have pressed The Blanco Sessions — the final recordings from Janis Martin, a founding mother of Rock and Roll.

Because of her enthusiasm, brilliant stage presence and rocking vocal style, Martin was also known as “the Female Elvis”.  She had a hit with “Will You, Will Yum”/”Drugstore Rock and Roll” in 1956. In 2007, near the end of Janis’s life, she and Rosie Flores worked together with Bobby Trimble to produce 11 new songs. Sadly, cancer cut her life short and she never got to tour behind the long awaited album.  This album will finally be available on CD and Vinyl in September, courtesy of Cow Island Music.