Ken Janssen has long been a fixture on the Cleveland music scene. He has interacted with local and touring musicians as a booker/bartender at the Beachland Ballroom and Tavern, and enthralled audiences as a founding member of The Hot Rails and The It*Men. Before moving to Cleveland, Ken cut his teeth in Kent, Ohio, providing a crucial link between the various social and musical factions in the area. He was always willing to help the bands – whether that meant securing out-of-town gigs, or just making sure there was a well-stocked party after the show.

Now Ken needs our help. In November 2012 he was diagnosed with Amyotrophic lateral sclerosis, commonly known as ALS or Lou Gehrig’s disease. ALS is a disease of the nerve cells in the brain and spinal cord that control voluntary muscle movement. Expensive treatment and surgery will be required to slow the progression of the disease.

Many have graciously offered to help in any way they can. Rather than start a foundation to simply collect donations, Ken wanted to do something fun that would provide entertainment value as well. A benefit concert is scheduled for June 1st at the Beachland. In the meantime, Janssen and friends have decided to start a new record label to preserve Ken’s legacy and passion for local music.

Stow House Records is pleased to announce the vinyl reissue of the 2004 It*Men compilation Greatest Its. The recently reunited It*Men are a garage rock band comprised of current and former members of The Dreadful Yawns, The New Lou Reeds, Volcano Fortress, and New Planet Trampoline (among others).

You can pre-order the LP and/or contribute to Ken’s medical fund via Ken’s GrooveBot campaign. 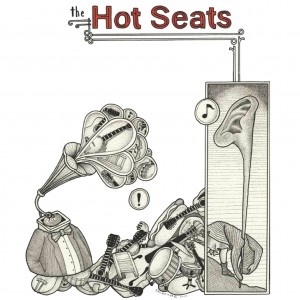